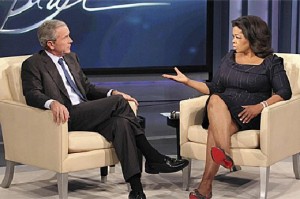 Well, whether you love him or dislike him, most everyone would probably agree that George W. Bush isn’t known for his eloquence in speaking. But in an interview with Oprah that aired last week, he was never, in my opinion, more eloquent.

Near the conclusion of their interview, Oprah played a clip of the former President on her show ten years ago when he was running for office. She then asked, “If you knew then what you know now, what would you tell that presidential hopeful?”

He said he’d tell his younger self what an honor it is to serve as President and how he will face some tough times, but what struck me was his emphasis on the importance of principles. “Have a set of principles,” he said. “Defend those principles no matter what it might cost you.”

He then said he hoped he would be remembered as someone who didn’t sacrifice his principles for the sake of popularity, adding:

“If you chase popularity, you’re chasing something and it’s just a fleeting moment, but principles last forever.”

Wow! That’s powerful and so true! You don’t have to be President of the United States to face the challenge of sacrificing your principles in the hope of gaining something, that in the moment, might seem worth the trade. It takes stamina to not sell out your principles in exchange for a promotion or popularity, both of which are short-lived and neither of which will attract producers or future leaders to your team.

After all, you cannot be an effective leader and chase popularity. It’s too hard to make decisions on behalf of the company if you’re worried about the popular vote. Bush is right; if you chase popularity or if you politick for positions, whatever you attain will just be a fleeting moment in your leadership tenure.

Like the President’s legacy, our legacy as leaders is determined after we leave. We won’t be around to dictate what is said about us once we’re gone. The people decide, and popularity doesn’t impact people. Living by principles and standards worth passing on from generation to generation impacts people, and that is something that will be remembered because it influences and inspires those serving around you.