The Sacrifice of Leading, Part II 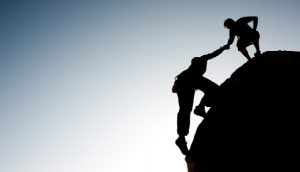 Today I want to continue our discussion from Monday on sacrifice! Sacrifice changes as you grow upward in an organization. It gets less physical and more mental. It becomes less about you and more about the team and the organization. And at its highest levels, it tests your intuition, your character, and your courage.

I believe that the “sacrifice of leading” can be divided up into four levels, with each level defining the kinds of sacrifices that might be demanded from you at each stage of your career.

At this basic level, you make sacrifices to differentiate yourself as a keeper versus someone just holding a job. Your sacrifices are driven by helping others but not yet putting others before yourself.

Examples of Sacrifices at the Expected Level:
•  Skipping lunch to finish a project
•  Staying late to help a teammate with a deadline
•  Volunteering for additional work while already carrying a full load

This is for those who are transitioning into positions of management where they’re responsible for the welfare of other direct reports. Once here, your obligation transitions to putting your teammates’ needs before your own. Time is a huge sacrifice, as more of your time is extended to your direct reports, leaving less time to get your own work done.

Examples of Sacrifices at the Transition Level:
•  Stepping aside for prime vacation days so your team can choose them first
•  Coming in early and staying late so you are available to your team
•  Taking work home because during the day you gave your time to coaching or teaching a teammate

This level is for teammates who make the cut and move beyond management into leadership. The sacrifices don’t feel like sacrifices because these people usually wants to pay the price because they can make a bigger impact, and they are hungry for that calling.

With the Calling you still have all the requirements of the prior two levels, but now you face the challenge of sacrificing the privileges that come with this level. This is the most watched position of all and where many fall out because the sacrifices seem too extreme. You have prima donnas and egos above you and green, attention-demanding managers below you. You are responsible to lead all of them. The sacrifice of your personal time and pleasures is huge. That’s why I feel that true leaders are called to this level.

Examples of Sacrifices at the Calling Level:
•  Changing your outward appearance and expressions because people are watching
•  Giving a massive amount of your time to your team and your leader. You are leading 360 degrees.
•  Using your time and energy to learn and grow
•  Taking on full responsibility for decisions without working out minor details with your leader, as by now you should know the foundation of your leader’s decision-making process. If you don’t you’re behind.
•  Stepping aside and making sure that your managers and your teammates get the credit, even if you were the inspiration and the drive behind the project

Appropriately named, since at this stage sacrifices are very complex. They can be personal tests about your character or risks to your career, depending on the stance you are willing to take.

At this level you’re literally banking on the sacrifice to pay off down the road, and it’s your job to walk the talk before your position is a rule or a popular stance. You may have to put yourself out there many times, using only your intuition and your gut as your strategy. This is when defining moments make you proud or disappointed.

Having a strong foundation and a vision are both crucial at this level, as the vision is the foundation on which your decisions are based. Everything rests on what you stand for, and if it’s different from the “pack,” then the stand becomes even more important for you to take. This type of sacrifice is most stressful because time will prove your stance right or wrong, but what a great opportunity to walk the talk from the top! The toughest sacrifices will be your defining moments.

Examples of Sacrifice at the Complex Level:
•  Publicly standing against the popular vote because you don’t agree with its agenda or foundation
•  Risking your career because you choose to speak up vs. settling and not challenging status quo

It’s ironic to think that at this level you may risk the sacrifice of your career, the same career that you sacrificed so many things to grow. Though this may seem depressing, in a strange way it isn’t, not to me anyway. It’s breathtaking and rewarding to have the opportunity to test your leadership character and courage at the highest level.

So as you can see, we sacrifice throughout our career. The more responsibility, the more defined and numbered those sacrifices become. However, I’ve found all the sacrifices – even the toughest ones – have all been worth it, and over time I no longer view them as sacrifices. They are simply responsibilities that come with leadership to which I am dedicated. I don’t pay the price to get to a higher level. I pay the price to help others get to their desired career level. It’s a leadership cycle that should replicate from generation to generation. You pay back to the next generation what the prior generation gave to you.

Sacrifice is a very intriguing subject, and while we know it’s a topic that’s alive and well, once opened it also becomes complex and emotional. Now, choosing not to sacrifice isn’t a bad thing. However, trying to lead and get out of making the sacrifices that leadership demands will gain you few followers, and over time it will result in you only making an average difference in the lives of those in your wake.