REALity Question: Who’s More Valuable – the Leader or the Player? 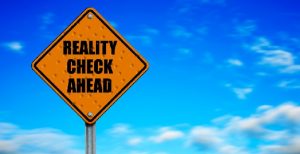 This week’s REALity Question is one that I have fun asking various groups and teams from time to time.

Who’s more valuable – the leader or the player?

So what’s the answer?

Interestingly, both the coach and the players are equally important. I know, my answer sounds like I’m taking the easy way out by not choosing a side, but I truly think it depends on the conditions of the game.

For example, an inexperienced coach with talented players can really frustrate the players. The coach may not know what to do, what players to play, which play to call, when to call timeout, or just the right time to praise or scold. When the coach is weaker than the players, top performance won’t be attained because of a lack of synergy. The team may do well “in spite of” the coach, but it won’t perform at its full potential.

On the flip side, a great coach can only do so much without the talent to perform. However, the team will survive because the coach will have the team doing the right things at the right times. Some wins will come as a result of sheer persistence and consistency.

Now, let’s leave the ball field for the boardroom. Whose performance is more important to a company’s success: the leader or the players? I put together this simple matrix to help illustrate the importance and the relevance of both the leader and the player’s performance. 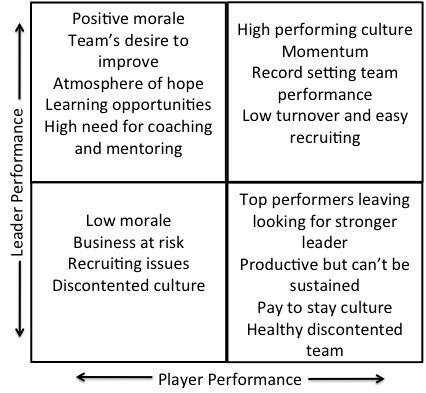 As you can see the healthiest, most productive, and safest position is the top right hand corner. A high-performing culture, momentum, record-setting team performance…These are all the results a company can have with strong leaders and strong players. The other three have their issues, but none are as fatal as the bottom left square where we see the disaster that weak leaders and weak players can bring to an organization.

In looking at this matrix, it’s obvious that the leader and the player are equally important. You can only reach your full potential and momentum when you have strong leaders and strong players.