How We Built A Meaningful and Productive Relationship: Our Unedited Thoughts 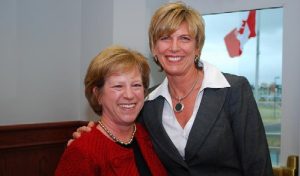 I believe we are who we are because of the people God sends in our lives. My character and person are formed from all the people that have influenced me from birth to my “mature” current age. One of the greatest influences in my life is the inspiration behind today’s blog post.

Diane Brown started as my executive assistant four years ago. We finished our “business” season together two months ago, and this weekend she moved back home to Amarillo, Texas. During our tenure together we’ve had many people ask us how we developed such a productive working relationship. That question has always made me grin as I tried to figure it out myself.

So, I decided to dig into it. I wrote down key elements of why I felt Diane and I have been so productive as teammates. Then I asked her to do the same. We wrote our thoughts down separately so that our comments wouldn’t influence one another. We are sharing our unedited thoughts with you in hopes that it might help build more productive and meaningful relationships between titled leaders and their assistants and between colleagues of all levels.

Acting Beyond Her Title.

While Diane had the title of executive assistant, we were actually partners in leading. Many executives use their assistant to serve only their needs. Their duties consist of organizing calendars, travel arrangements, and screening phone calls. Of course, Diane did all that for me, but those activities were secondary to her greatest value, which was helping me be a better leader for the people inside the companies we served. Her influence as a leader was equal to my own, if not greater.

Diane’s competence allowed me to run full steam ahead knowing she would be right with me. She never slowed me down and was often running ahead of me since she knew my thought process. Her competence quadrupled my production and increased our trust for each other. She wasn’t afraid to challenge my thinking, which helped me think through decisions better.

Trust is not tested in the good times. Its true strength is exposed during challenging and defining times, times when it might seem acceptable to look the other way, to protect yourself first, or to even bail from the situation. Diane and I have weathered many tough times together. We’ve observed each other live out what is easy to talk about. I think this relationship, founded on consistency and trust, spilled over to help cultivate a culture of trust with our teammates. I NEVER doubted how my opinions or stance would be represented if Diane was in a meeting where I was not.

Diane and I are complete opposites. We learned to respect each other’s areas of competence and intuition. While I had the “authority” on the organizational chart, I respected Diane’s areas of giftedness and talent. When situations required her strengths, she became the authority.

Diane and I laughed a lot with each other, but we also confronted one other! Like most healthy relationships, there were times when we disappointed each other, but we never let it go too long without having an honest conversation about it. These crucial conversations were two-way, and they were pillars in building the trust and bond that we have today.

Linda Allowed Me “In.”

This is tied to an already earned trust and respect, but this is key because many bosses are not of a mindset to allow their assistant be a partner with them.

Linda accomplished more with me than without me.

Linda was so consistent with her moods, decisions, and actions. It was easy for me to tell teammates or her direct reports what her opinion or direction would be.

What started out with me obtaining a great employee bloomed into getting a leadership peer and now a wonderful friend and sister in Christ.