Don’t Stay on a Sinking Ship 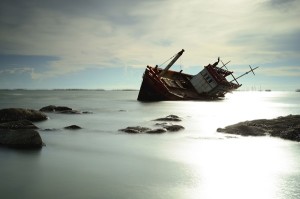 You’ve heard the reasons before. We already bought the software. We’ve invested too much time. We’ve spent too much money to turn back now. The decision has been made.

How many times have you crammed a decision into implementation even when you know it’s not the best decision…simply because you made the decision?

Moving forward with the wrong decision isn’t progress. At best, it’s misplaced good intentions. At worst, it’s reckless and irresponsible. But what else is there to do?

Here are a few ideas on how you can move through a bad decision (or a good decision gone bad).

Communicate to your team.

Bring your team together. Thank them for their efforts, and remind them of the original objective. Discuss why the current decision or direction is no longer the best option and how you can and should move forward. Odds are your team already knows by now that it’s the wrong decision anyway.

It takes more than a little humility to admit that you’re going in the wrong direction. And sometimes ego extends beyond an individual to a team or even an entire company. Don’t let pride be what stands in the way of you making the right call.

Change and evolve into the new decision.

Once you decide what direction you need to go, take immediate steps to move in that direction.

Who in your organization needs to be a part of this new decision or direction to make sure you don’t make the same mistake twice? If the change in direction is a big one, consider hiring an outside consultant to help you work through and communicate the change.

Use your vision and non-negotiables as the standards.

If you’re not sure about your decision, check it against your long-term vision. Does your direction support that vision, and is it in line with your non-negotiables?

Work can seem chaotic without the added stress and workload that accompanies a major change. Be aware of your team’s stress level, and as the leader, ensure that the chaos is a temporary thing and help them see that too.